The Work of Commissions in Scotland 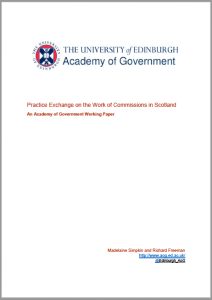 This paper reports a project undertaken by the Academy of Government, in collaboration with Oxfam Scotland, on the work of commissions. Its purpose was to inform a report by Oxfam Scotland responding to the Scottish Government’s announcement, in the Fairer Scotland Action Plan, of a Poverty and Inequality Commission. The project was carried out by reviewing elements of the existing published academic literature, and drawing on the experience of those who have led and participated in commissions or other, similar bodies in Scotland.

Research on commissions requires some thinking about what we mean by commissions, which can operate under a variety of different names. Our focus is on groups convened to advise government as to how it should proceed in respect of a given policy problem, and we include Royal Commissions, Commissions of Inquiry, Committees and Working Parties. For the purpose of this project, we note that they operate in similar ways. Though there are no institutional rules for how to design a commission, the literature points to an implicit standard model: a commission is announced and a remit developed; a chair is appointed and members recruited; then, the commission begins its work: collecting evidence, deliberating, and reporting. We use this sense of a standard operating procedure as a structured entry point for discussion, bringing together comment from the literature as well as practice-based testimony. Using this framework, we interrogate the effectiveness of what appears to be normal practice, and to consider possible alternatives to it.

Research participants included senior level professionals from central and local government, universities and the third sector who were selected from a longer list of contacts and referrals compiled by AoG and Oxfam Scotland. Each participant was recruited for his or her specific experience of commissions and related bodies concerned with inequality and/or poverty. Nine participants joined us in a half day focus group and a further five contributed through one-on-one interviews and email. To prepare both the group discussion and interviews, we circulated a briefing note, which included key points from the literature and prompts for further thinking. Both the interviews and the group discussion was structured around the note, organised in four sections or phases of conversation (rationale, membership, process and impact) and conducted under the Chatham House Rule.

Our timescales were short, and resources were limited, and we cannot claim to have completed a comprehensive empirical study. Instead, we offer a contextualised, curated collection of written and oral testimony about the work of commissions in Scotland.